The Day the Mail Stopped

The wildcat Postal strike that began on March 18, 1970 signaled the end of collective begging and the beginning of collective bargaining that raised hundreds of thousands of postal workers, craft and management, from poverty level wages to middle class wage earners.

On that faithful day in March NALC Branch 36 NY, Branch 41 Brooklyn, Long Island Branch 6000 as well as branches In New Jersey, supported by APWU postal clerks, staged an illegal work stoppage. At its peak over 200,000 letter carriers went on strike that included letter carriers from throughout the country including Boston Branch 34, Minneapolis Branch 9 and San Francisco Branch 214. Read the full article. 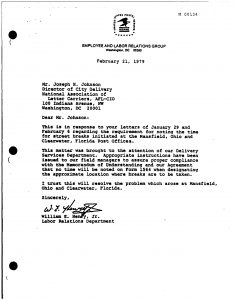