On January 11, 2017, in the Waterbury Lakewood PO, President Daniels along with Chief steward David Adeymi and steward Jolanda Velez-Ruberte’ presented Brother Clinton Parker with a NALC National Hero’s Pin on behalf of National NALC President Fred Rolando and a NALC Branch 20 Jacket in recognition of his heroic actions when assisting Watertown Police on December 16, 2014.

These actions were detailed in a Memo of appreciation sent to Brother Parker on November 14, 2016 from Deputy Chief R. Desena of the Watertown Police Department. That Memo read, “This memo is to officially thank and commend you for your meritorious actions at the scene of a barricaded subject at 175 Bryant Rd, Watertown of 12/6/2014 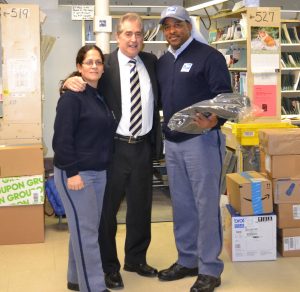 Police personnel from Watertown and Waterbury had responded to and surrounded that residence, after learning that a heavily armed 27 year old EDP with PTSD was threatening himself and others with bodily harm. Also, that a shot was fired towards the direction of police personnel.

Waterbury officer Mike Tripp knew that you were a military acquaintance of the subject, acting in your capacity as a sergeant first class. Officer Tripp brought your to the scene.

With total disregard for our own safety you entered the home and counseled the subject which resulted in his surrender shortly thereafter. You should be commended for your actions.”

Upon being made aware of these actions NALC National President Fred Rolando then sent a letter to Brother Parker restating the facts and concluding with, “On behalf of over 287,000 of your brother and sister letter carriers, I thank you for your selfless actions and commitment to doing what letter carriers do best – serve and protect in our communities day in and day out.”