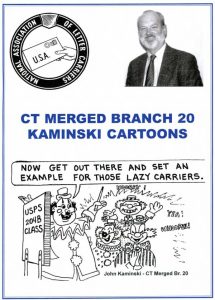 But the role he enjoyed most by far was that of union cartoonist. And he was the best there was, winning national awards and recognition from the NALC and accolades from NALC Branches across the country. Branches would reprint in their publications John’s cartoons with attributions and thanks. For many years John had a well-deserved cult like following.

We have provided below for your viewing all the cartoons we have used over the past thirty-one years. Enjoy!