Home › Minutes of the Meeting › Bulletin Board

Branch 20 Officers Honored for Their Years of Service

Posted in Uncategorized on April 4, 2017 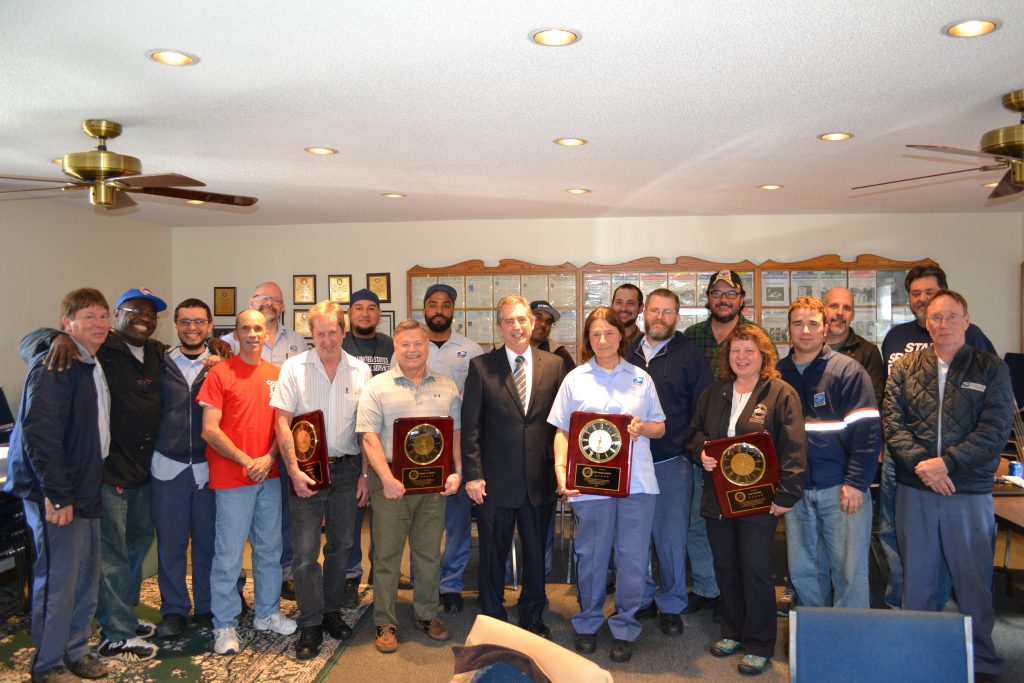 In a brief ceremony President Daniels took the opportunity to recognize, honor and thank four long time Branch 20 officers for their selfless efforts on behalf of Branch 20 and its members.

The NALC and USPS have signed Agreements that clearly state that the Delivery Operation Information System (DOIS) and the Performance Engagement Tool (PET), “…will not be used as the sole determinant for establishing office or street time projections.”

If you believe you will not be able to complete your assignment within eight hours you should do the following:

Greetings Meriden Carriers, spring is just around the corner. We have been lucky with some very mild weather recently. I want to take a moment and thank you all for your hard work and dedication, not only during the recent severe weather but throughout the year.

Congratulations go out to CCA Taisha Allende on being converted to full-time regular. Welcome to our newest group of CCAs including John Iannone, Steve Sambitsky, Kevin Sheridan and Izzalande Charles. Condolences to fellow carrier Dave Alagna on the passing of his mother. Our thoughts and prayers are with you. Finally, best wishes to Allen Roy who recently retired. Your daily complaining will be missed.

The 2016 Christmas party was organized by Ron Neilly and Angeles Angelakopoulos aka ‘Angelo’ with most of the funding coming from Branch 20 and supplemented by your local stewards to enable our members to attend the party free of charge while their guest(s) were charged a token fee to offset the cost. Reports indicated that the party was a great success though the turnout was not as impressive as expected. Thanks to Branch 20 and President Paul Daniels who expedited the funding for the party and Waterbury stewards who help fund it.

With the winter weather comes a lot of unplanned, undeserved and unexpected accidents. I was unfortunately affected by the first snow storm of the winter season in December and ended up with an injured elbow and a tear of the rotator cuff that have since sidelined me. The good thing about the whole incident was my ability and instant determination not to be severely injured as I held on very tightly to the hand rail at the residence despite the fact that the left side of my body was already on its way down. The other good news was that I had on the postal approved foot ware. Though the foot ware didn’t prevent the accident from occurring I was just so glad that I had on the foot ware for various technical reasons. And that brings me to the issue of wearing a proper uniform. Management has been on the foot patrol in the office and when they visit you in the field checking out which carrier is not wearing the proper uniform and foot ware. For those who are new, we encourage you to see your local steward at the downtown office if you are having issues with uniforms or uniform allowance.

Carrier Brandon Jones was appointed by the president as an alternate steward for the Waterbury main office effective January 1st 2017. Brother Jones is also the web manager for the newly unveiled branch website which I encourage everyone to visit @nalcbranch20.org. There are tons of valuable information for any member who wish to enlightened themselves about our local and national unions. Our local contract is also on this website as well.

The following CCAs were hired during the last two quarters in Waterbury:  Willie Parker, Jr., Carmelo Gonzalez, Joseph Ferrante, Steven Haydu, Neil Mulhall, Deborah Lodato, Harrison Dominguez, Hector Montejo and Debra Olson. We also welcome Waterbury’s postmaster Lisa King back to the city. She has been on a detail assignment at the District level for almost a year.

The National President Fred Rolando reported to the stewards and officers present at the recently concluded New England Region Rap Session held in Rhode Island that the issue of the contract has still not been resolved. The President noted that the NALC strategy is to close the gap between career and non-career employees as well as making an effort in getting the former transitional employees credit for their transitional employee’s time. He announced the composition of various committees in the negotiating process and opined that postal management on the national level should be able to offer incentives for the 40,000 letter carriers nationwide who are now eligible to retire as well as improve the attrition rate of the new workforce that currently stands at 60% nationwide. The uniform program as well as respect and dignity for the CCA workforce were among the other issues of the contract. Two thousand CCAs are currently serving as 204bs nationwide while 45,000 of them have since been converted nationwide to full time career employees.

Lakewood carrier Clinton Parker was honored for his heroic efforts in rescuing a situation that could have gone really bad a couple of years ago in Watertown. Brother Parker’s efforts were recognized and honored by President Paul Daniels on behalf of President Rolando and the entire NALC Executive Council.

We rejoice with Brother James Ruby who gave over 31 years of exemplary service to the great city of Waterbury before recently transferring to Maine. Brother Ruby was the ultimate professional, a quiet carrier always in a complete postal uniform, absolutely charismatic and a team player. His going away party at Scorecard was attended by 45 city carriers including 2 retirees. The entire city wishes this brother and his family the best of everything in Maine.

It is noteworthy that the postal service has had a 14% package growth. Out of the 10 billion packages delivered in the United States last year the Postal Service had a 42% share while our closest competitor UPS is at 37% and Fedex has 21%. USPS is currently the largest delivery company in the United States and I would like to commend each and every one of you for a job well done in delivering those packages to our customers on our individual mail routes. There has been a report of numerous clock manipulations nationwide. The union hereby encourages our carriers to be vigilant and keep track of their workhours to avoid time clock manipulations. Please see a steward if you note any irregularities with your work hours.

Our union has been very steadfast in defending all of our member on and off the workroom floor. I would like to share the following information with all of our membership to prevent against other carriers from falling into the same circumstances as well as to create awareness for the new employees. Two of our carriers in Waterbury are currently facing the removal procedure for safety related issues. One carrier had an accident with the new vehicle that was never reported to postal management and the other left his postal truck running while away from the truck in the parking lot and have since been placed on emergency placement without pay. Both issues are currently in the grievance procedure. So I would advise everyone to be aware of your surroundings at all times and be aware that we are under constant observation by postal management. Please also be aware that the scanners are GPS enabled and every carrier’s movement can be monitored within the city. The union has always encourage a fair day’s work for a fair day’s pay and applying that standard will go a long way in protecting all carriers.

Finally, as we all look forward to a much better weather I would like to wish each and every one of you a healthy and prosperous 2017.

President Daniels has accepted the resignation of Steward Gary Amidon for personal reasons and has appointed Timothy Wells as Steward for the Waterford office. Brother Amidon has served the members in Waterford with the highest degree of ability and integrity and we thank him for his service and wish him well in the future.

Many thanks to all the City and Rural Carriers, Clerks and Management who helped make our annual trip to the Holy Family Shelter to deliver toys for the kids a huge success.

Special thanks to our chief Elf retiree John Studley; to Rich Hosford who helped bring the collected toys and to Jim and Chery (Mr. and Mrs. Claus). As usual the children were delighted and excited with our visit.

Get well wishes go out to supervisor Lou Lavecchia who has been out for an extended period. In Lou’s absence supervisor Shanna Cruz and 204B Eva Tylinska-Oswiecinska (a T-6 carrier from Norwich) have been doing a good job filling in and keeping the office afloat.

Posted in Uncategorized on March 1, 2017